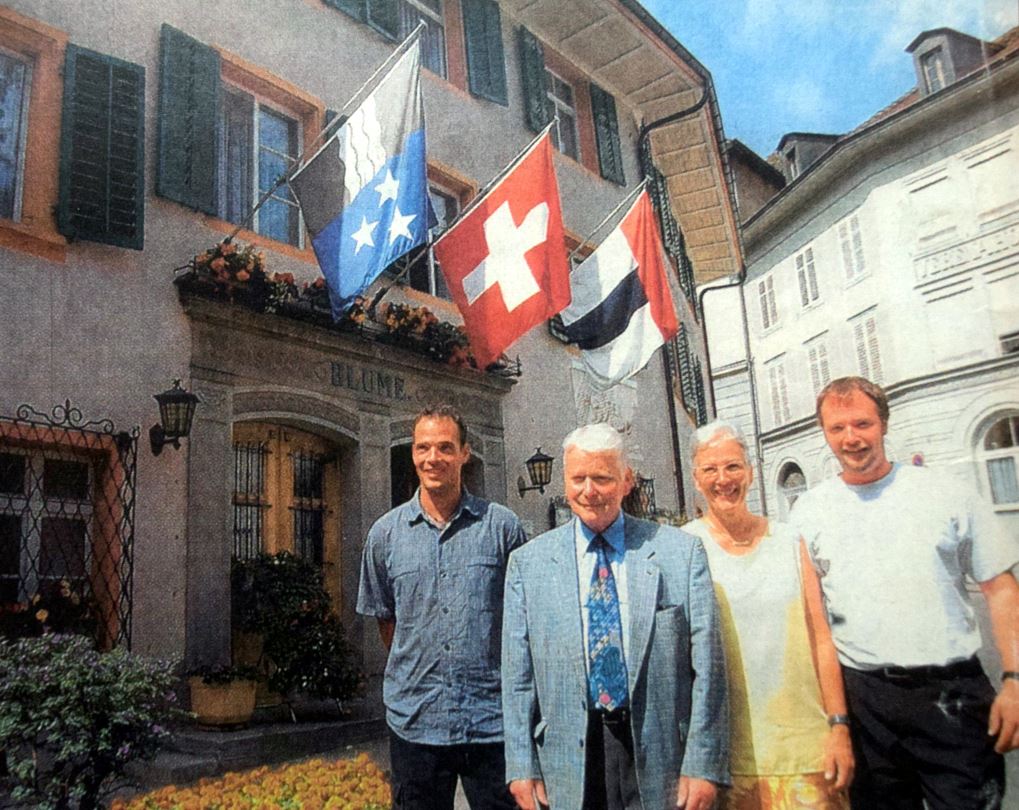 «We are a big family house»

Johann Rudolf and Heidi Erne took over the Hotel Blume in November 1972 and reopened it in 1973. Their two sons, Silvio and Patrik Erne, grew up in the Blume and took over the management of the house together in 2002.

The Erne family takes over

The reopening of the Hotel Blume under new management took place on April 1, 1973. Almost 30 years later, the sons Silvio and Patrik Erne took over the management and have been second generation running the family business ever since.

In the 1970s, the Blume was still purely a spa and health resort hotel, as there were a dozen others in Baden at the time. Guests usually stayed in the house for two to three weeks, year after year.

Various reasons led to cures going out of fashion. Travel by air became cheaper and cheaper, spa stays were no longer covered by insurance, the generation of regular guests died out and the town of Baden became less attractive. With the loss of spa guests, new business had to be developed. The hotel gradually established itself as a seminar and business hotel. The historic rooms are also used for weddings and celebrations of all kinds.

During the past decades, the Blume has been gently renovated again and again. As a cantonal protected object, this requires close cooperation with the preservation of historical monuments. An appreciation of this work was awarded to the Erne family in 2003 in the form of the Aargau Heritage Prize.

All four family members have completed training as hoteliers at a hotel management school: Johann in Lausanne, Patrik in Lucerne and Heidi as well as Silvio in Zurich.

Johann Erne was born in Leibstadt on August 25, 1934. He attended elementary school in Hausen near Brugg. After district school in Therwil, he began his career as a hotelier. That he also took this path is no great surprise, as the Erne family has been in the hospitality business for generations. Johann Erne completed apprenticeships as a butcher and cook and then graduated from the Ecole Hôtelière in Lausanne as well as the Entrepreneurship Seminar for Swiss Hoteliers. He gained his practical professional knowledge in countries such as Spain, England and the USA. From 1964, Johann Erne was the tenant of the Zwyssighof Hotel in Wettingen.

Heidi Erne was born Heidi Lendenmann on May 23, 1946. She is the oldest of three siblings, raised in Amlikon. She attended secondary school in Weinfelden. She then spent a year in French-speaking Switzerland, a language course in England and the Belvoir Hotel Management School in Zurich. In June 1972, she married Johann Erne and took over the management of the Blume together with him in April 1973.

Silvio Erne grew up in the Hotel Blume in Baden and attended schools in Baden and Ennetbaden. He then completed a cooking and service apprenticeship at the Bahnhofbuffet in Zurich. After various seasonal positions in Switzerland, he trained as a hotelier at the Belvoir Hotel Management School in Zurich. Since 2002 he has been managing the Atrium Hotel Blume with his brother Patrik.

Patrik Erne grew up in the Hotel Blume in Baden and attended the schools in Baden. After a cook and service apprenticeship at the Hotel Du Parc in Baden, he took up various seasonal and internship positions in Switzerland and abroad, for example in Zermatt, Arosa, Nice and Bangkok. He graduated from the Hotel Management School Lucerne and has been managing the Atrium Hotel Blume together with his brother since 2002.

The Blume under monument protection

The Blume still displays a piece of pre-industrial era bath architecture, elegantly combined since 1872 with an extraordinary annex by Robert Moser. The house is constantly undergoing gentle renovations and the hotel still operates some 19th century style baths. In 1967, the Blume was listed as a historic monument. In the decades that followed, the hotel was restored in numerous stages. In 1984, the facades of the older building wing on the spa square were renewed. In 1992/93 an exterior renovation of the extension building by Robert Moser followed. From 1990 on, the hotel rooms were successively renovated and adapted to the requirements. In 1999-2001, the ceiling of the dining room in the Robert Moser wing was restored.

« In dealing with historic building fabric, the Erne family reacts considerately and in an exemplary manner, preferring gentle restoration to a rigorous modernization push. »

In his art guide, Peter Hoegger describes the space:

« It is to be considered a stroke of luck that the square-facing north wing of the inn has survived the architectural boom of the Biedermeier period and is thus able to represent a piece of spa architecture of pre-industrial times alongside the neighboring younger hotels. Conversely, there is also a special architectural-historical value in the fact that the south-facing parts of the inn were demolished and replaced in the 19th century. (…) reminiscent of the formal language of Italian city palaces of the 15th/16th century (…) the cast-iron balustrade supports in front of the atrium galleries adopt French Régence forms, as they were mass-produced in 19th-century Paris by the Barbezat casting and forging company. (…)»

Some renovations from the last years

2006 Renovation/reconstruction of the Schindler elevator from 1898.

2009 Renovation/restoration of the ceiling painting in the Ladies’ Salon.

2016 Installation of ventilation/air conditioning in the Art Nouveau Hall

2017 Replacement of kitchen ventilation and new ceiling in the kitchen.

Interview with the Erne family.