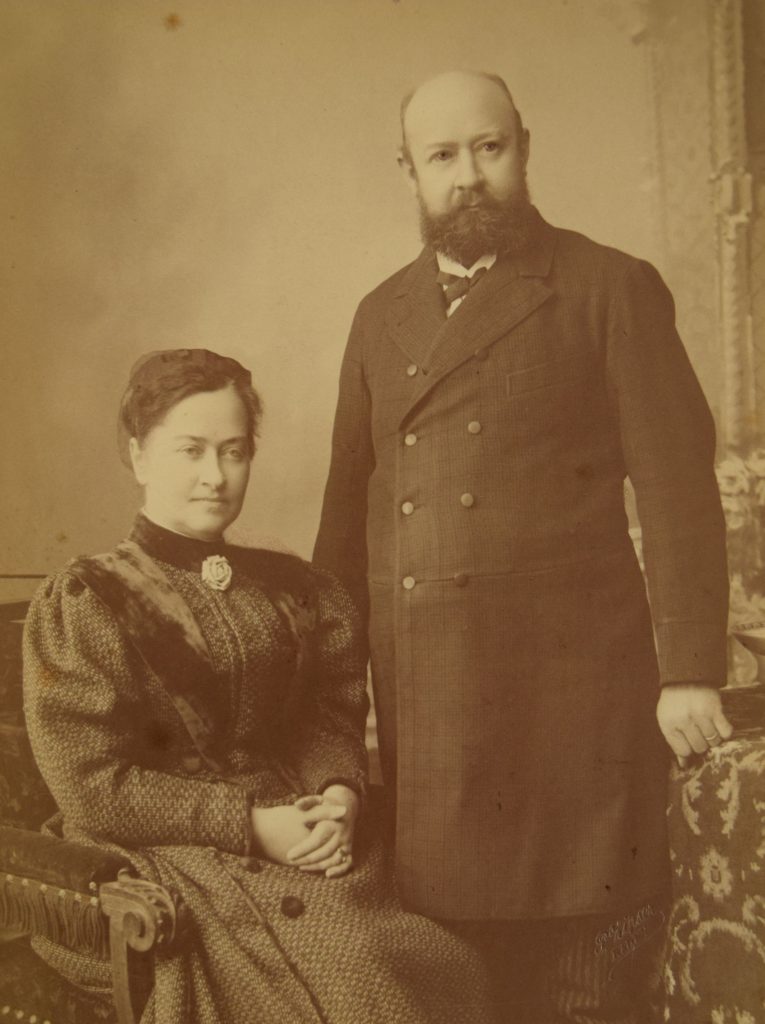 Mathilde Borsinger-Müller ran the Blume first with her husband, Franz Borsinger, and on her own after his death in 1898.

Every New Year’s Eve from 1880 to 1915, the hotelier Mathilde Borsinger-Müller would write a review of the year in a book. The result is an insightful and poetic work that offers a rare insight into the hospitality industry of the Belle Epoque.

Mathilde Müller spent her school years in Baden. She lived in the Burghalde, later in the Pfaffenkappe. In 1867 she began an apprenticeship with a family in Fribourg. After one year she came back to Baden. She was a member of the mixed choir and church singing. At the carnival in 1870, Mathilde took part in a masked ball for the first time and met Franz Borsinger there. A short time later she received a magnificent flower boquet from him. She met him again soon after on an excursion with the church choral society on the Habsburg castle. On June 1, 1870, the two became engaged and on the following January 9, 1871, they married. Their honeymoon took them for four weeks to Munich, Augsburg, Stuttgart, Karlsruhe and to war-torn Strasbourg. Then the news reached them that soldiers of the Bourbaki army crossed the border. The couple had to travel home, because Franz expected to be drafted. The first guests that Mathilde Borsinger-Müller accommodated were ten French officers of the Bourbaki army. Mathilde and Franz managed the hotel together until 1897, when Franz died unexpectedly. Mathilde continued to run the hotel on her own until she handed it over to her son Franz in 1909. She still continued to help occasionally afterwards. She died in Baden in 1925.

“Today I dip the pen in my heart’s blood to sketch the past year, for I write as – a widow.”

On the evening of August 6, 1897, Mathilde left the office for two minutes, apparently in the middle of a cheerful conversation with Franz. When she returned, Franz had suffered a heart attack.

Mathilde then continued to run the hotel alone:

“I silently vowed to the dear dead father to uphold the traditions of his house and to administer the legacy in his spirit and legacy.”

On February 1, 1909, their son, Max Borsinger, took over the overall responsibility for the Blume, including the barn, stables, garden, ice cellar, the Scharten and Wettigenberg vineyards.

Mathilde had worked with the Blume for a total of 38 years and had had a major influence on the house.

1882: «In the last hours of the now expired year, I look back once again at the past days. If I wanted to express the feelings of the crowd, I would have to record the past period of time in the leaves as a dismal, unhappy year. But God’s blessing has been upon our house, which we recognize with a grateful heart. The course of business was quite favorable, and even if the loss of the abundant vineyard was a highly palpable one for the wallet and the cellar, we had to console ourselves, together with a hundred others, for whom the cold frosts of May 17 also destroyed all hope of autumnal joy. From our two Jucharte vines we obtained half a vat of acidic unripe grapes.»

1889: «A great change took place in our own house on October 1, when Marie Müller, a cook who had served us very faithfully for 10 years, made her decision to take holy orders, which touched me deeply.»

1889: «In the last 14 days, a disease, called influenza, which first appeared in Russia, appeared and spread with great speed throughout the whole of Europe. Fortunately, this type of «flu» is not of a malignant character, but nevertheless whole families are affected by it and are made unfit for work for 5-6 days, a circumstance that depresses trade and industry sensitively.»

New Year's Eve Book / Excerpt 1890 (Many guests because of epidemic)

1890: «So the influenza came to us immediately after New Year’s Day and, as everywhere else, turned out to be very unfavorable. How many victims did not suffer from this insidious disease, no age, status or profession was spared and I thank God from the bottom of my heart that everything went well for us. As a result of these symptoms of the disease, the visit of foreigners in February and March developed rapidly and lasted throughout the whole summer. »

1891: «Business life showed little animation and in particular the months of May and June brought a significant deficit in the usual calculations».

«The 14th of June will remain blood-red in History, because on that day a terrible railroad accident occurred near Münchenstein due to the collapse of the Birsig Bridge. Sixty-three dead and over one hundred wounded brought the city of Basel in particular into deepest mourning and the whole of Switzerland into great compassion. And yet this terrible catastrophe could not suppress the jubilation and the great efforts made all over the country to celebrate the 500th anniversary of the Swiss Confederation on August 1 in the most dignified manner».

1895: «Meanwhile a buzzy business life developed in our house, Switzerland was teeming with foreigners and tourists, so that exceptionally our Baden was also very busy in the middle of summer. The mountain hotels remained full until the end of September, and in the annals of business, the 95 season will be considered an excellent one.»

1897: Sale of the Hasselland for CHF 112’000: «This favourable opportunity recently prompted us to return to a project that had occupied us for years: the construction of a passenger elevator, especially since it was precisely at that time that a new municipal water installation was decided upon, which helped us solve the technical issue.»

1898: «Finally, at the beginning of June, the work was completed to general satisfaction, and a high number of visitors, especially on the upper floors, gave this innovation a contemporary look.»

1900: «At the stroke of the twelfth bell tonight, a century is moving towards infinity. How small and unsignificant must Man feel when he tries to grasp time and eternity, when he gazes into the future and asks: what will be when this cycle has been completed again?»

1907: «The same (summer) brought a never seen frequency of foreigners to our bathing town, so that the season ended with 13’000 strangers.»

Installation of a central heating system: «as it is now so often a sought-after need.» The Blume was closed for five weeks.

1910: «Whether these two were to blame for the subsequent water catastrophe from June 15 to 18 in Central, Northern and Eastern Switzerland, as well as in Central and Eastern Europe? Without interruption, powerful downpours fell from the sky for 2-3 days and caused a national disaster through rushing water and landslide. Even our otherwise well-behaved Limmat was beside herself, flooded the promenade as a raging torrent and impeded people from entering the houses in Ennetbaden. From the Hirschen to the Schwanen, quickly erected walkways restored the traffic and some of the oldest men shook their heads and spoke with melancholy: «I have not seen such a sight for 50 years. The weather remained the saddest conceivable until mid-July. To all these disastrous phenomena was added the spectre of cholera, which suddenly appeared in Italy, especially in the province of Bari.»

1911: «July 20 brought a great joyful surprise to young and old. It is 9 o’clock in the morning, sound as of an approaching car can be heard, as the «Schwaben» floats across the «Lägern» towards Brugg in a majestic flight, steered by Graf Zeppelin himself. We live in a great time and the greatest wonder of all times is this steerable airship.»

1914: «Never before in the many years since I close my yearly spiritual accounts on New Year’s Eve, has it been so difficult for me to register them as it is today. In short words it can be explained, when I write down: since four months the terrible world war has broken out.  Even the harmonious Christmas bells, which proclaim peace on earth in all countries, ring out unheard in the cannon thunder and struggle of millions of people who were drawn from the farthest corners of the world to the gruesome mass murders.»