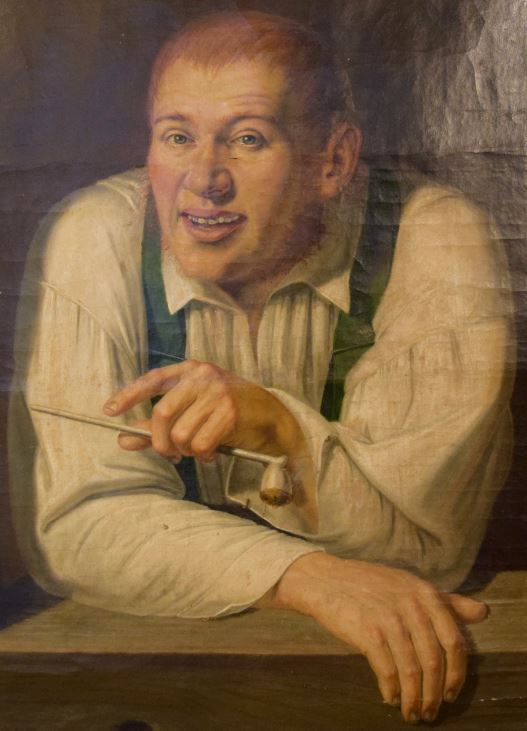 Franz Dreher’s painting from 1835 on the second floor of the atrium.

«This is not the receptionist»

The oil painting of the Zurzach drawing teacher Franz Dreher shows a man with a pipe in the style of genre painting / realism. The gentleman looks cheerfully relaxed out of a window: a thermal guest after a successful cure? The painting is marked with the initials F D and the year 1835.

«As if he were alive»

In 1921, Dr. J. Schollenberger wrote an article in a Baden newspaper about the artist Franz Dreher. Apparently he was enthusiastic about his oil painting, which had been on display at the Blume for many years.

«In the beautiful atrium of the Hotel zur Blume in Baden, looking down from a wall of the second gallery, is a painting that has become the signature of the establishment. It depicts a man in shirtsleeves lying in the window, with an inimitable smart-smiling face and a pipe in one hand pointing down into the courtyard room, painted life-size and as true to nature as if he were alive.»

As Schollenberger explains, a guest told him that he had passed by the painting while looking for his room and had asked the man where his room was. It is assumed that he did not receive an answer to his question.

The picture is marked with the initials F D and the year 1835.

The life of Franz Dreher

Franz Dreher was originally from Illereichen, Bavaria, Germany. He studied at the Academy in Munich with Peter von Cornelius but had to abandon his studies due to lack of money. He actually wanted to set off on a journey to Italy as an itinerant painter but got stuck in Aargau: «As he was on his journey to Bern, friends from Zurzach sought him out, talked him out of going to Italy and go to Zurzach instead.» With success: Franz Dreher taught drawing and calligraphy in Zurzach from 1834 to 1867, in between also in Kaiserstuhl and Leuggern. He died in 1888.