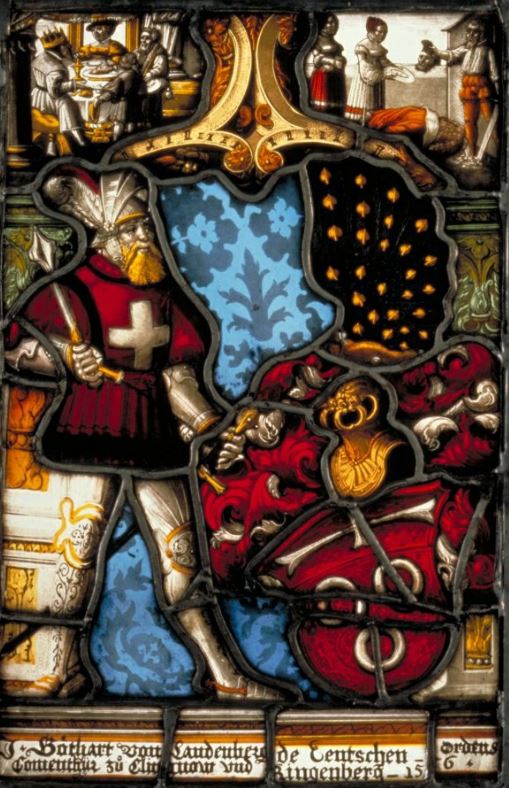 Why was Gotthard killed?

On 11 December 1526, Gotthard II of Breiten-Landenberg was stabbed to death in the Blume while he was still in his bath shirt. The presumed perpetrator: Jakob Seeholzer, innkeeper of the Blume at the time. Several hypotheses try to clarify his death, but none of them is certain.

Hypotheses about the death of Gotthard

The branch of the Breiten-Landenberg family in question had been in financial straits for some time, including Gotthard II. He is considered to be a rather problematic contemporary, who clashed several times with the Zurich government. After the introduction of the Reformation, Gotthard refused to continue to pay the wine tax (due to the fief founded by his ancestors to the chaplaincy of Turbental), «since singing, reading, and saying mass are no longer valid and no longer bring comfort to the souls of the deceased.» The Zurich government did not agree. Gotthard gave up his citizenship, sold the castle of Alt-Landenberg and settled in Brugg.

In 1526 he went to Baden for a cure. Why he was killed in the Blume is not completely clear. Hints point to different directions:

1) According to oral tradition, Gotthard courted the landlady too strongheartedly and was subsequently murdered by her husband.

2) According to court records: Gotthard is said to have distributed various gifts (gems) to «all sorts of suspicious maidens» who came in and out of the Blume. The valuables could not be found afterwards. It seems that his possessions were confiscated at that time. Was that why he wanted to spend his fortune?

Unfortunately, for lack of tangible sources, the question must remain unanswered in regard to Gotthard’s death.