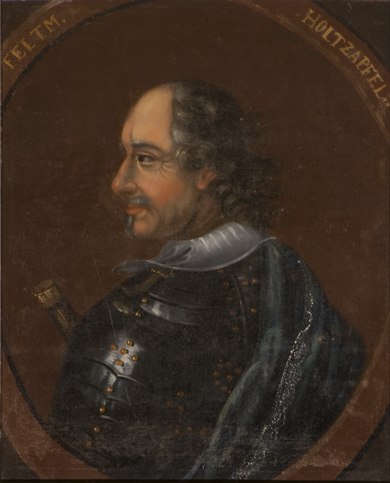 Peter Melander was an important general in the 30 Years War.

Count of Holzappel gets in trouble again

Peter Melander von Holzappel was born Peter Eppelmann on February 8, 1589 in Niederhadamar in Hesse. He moved to the Netherlands, where he grew up with his uncle. The latter had his name «Holzappel» translated into Greek: Melander. The family was ennobled in the 17th century. From 1615 Peter Melander fought in the Thirty Years’ War on the side of the Protestants, first in the Dutch army, later for Venice. In 1620 he commanded a Swiss regiment near Basel. After further service in the war, he resigned as commander-in-chief of the Hessian troops in 1640 because he disapproved  further anti-Habsburg policies. As a result, he was recruited by the Habsburg emperor, who had too few army commanders. After some time without being engaged, he joined military duties on the side of the Catholics 1645. He died on the battlefield in 1648, four months before the end of the Thirty Years’ War.

Peter Melander was a respected warlord in his day, with many warring powers courting his service. It is rumored that his greed was legendary.

Between 1642 and 1644 Count Holzappel appeared several times in Baden. At that time he was not in military service. The Baden council ordered the daughter of Christoph Brunner to stay at home at night under threat of punishment of the tower (prison in the city tower?). Holzappel was later expelled and he was no longer allowed in the baths and certainly not at the Blume.

«The old woman (=Verena Breitenstein) and the young woman at the Blume should be ordered, under penalty of the tower, never to harbor Holzappel again, and if the young woman wanted to follow him, she should no longer be allowed into the city.»

All this was of no avail, because a short time later Holzappel appeared again in Baden and caused trouble with his behaviour. He is also said to have challenged a gentleman from Modena to a duel. He was fined 100 pounds for this and again 50 pounds when he was back again in the Blume less than a year later. Various members of the Brunner family were also fined and the daughter was banned from the city for two years. It is unclear whether she accompanied him afterwards. Holzappel returned to serve on the side of the Catholics in the Thirty Years’ War. He died on May 17 in the year 1648 at Zumarshausen, in one of the last great battles of the Thirty Years’ War on German territory.

Peter Melander had several extramarital affairs, including one with a maid, which resulted in several children. He is also an ancestor of the former Dutch Queen Beatrix (today Her Royal Highness Princess Beatrix of the Netherlands) and the Swedish King Carl XVI Gustaf, among others.